The Schwarzwald Incident, By Laura Garrison

Several months ago, deep in the heart of the Black Forest, a party of hunters discovered a crumbling cottage that had been constructed almost exclusively from edible materials.  Upon exploring the interior of the dwelling, they found the charred remains of a human being in an oversized oven.  Weeks of police investigation followed, and eventually two siblings, Hansel and Gretel Hassenpfeffer of Offenburg,
both minors, were tried for the murder of Adelinda Becker, the late occupant of the cottage.  The Hassenpfeffers were acquitted on the grounds of their own testimonies, in which they claimed that they had
acted in self-defense.  Their story was corroborated by the large number of children's bones that were uncovered in the cottage's root cellar.

Curious about the motivation behind the actions of the key players in this highly publicized case, psychologist Dr. Jacob Wilhelm, Ph.D., secured interviews with the siblings and their father, Karl
Hassenpfeffer, shortly after the details of what became known as the "Schwarzwald Incident" were made public.  The following excerpts have been transcribed from the audio recordings of those interviews.

DR. WILHELM: Tell me how you arrived at the decision to abandon your children in the forest.

KARL: Well, once my wife--God rest her soul--got an idea, she became fixated on it, and she got it into her head that we needed to get rid of the children.  She started watching them the way a cat watches a spider on the wall.  She said we could keep the kids and starve to death, or we could lose them and live.

DR. WILHELM: And this did not strike you as a false choice?

KARL: What do you mean?

DR. WILHELM: Were there not other ways in which you could have supplemented the income you made as a woodcutter?  Your wife could have taken in sewing or washing, perhaps.  Lots of housewives do, in
lean times.

DR. WILHELM: What about asking your neighbors for assistance?  Or your church?

KARL: The neighbors had nothing to spare.  And I'm not a churchgoing man.

DR. WILHELM: I see.  So you agreed with your wife's assessment of the situation--that the two of you would be better off on your own?

KARL: It was a tough decision.  I was very fond of the children.

DR. WILHELM: And your wife?  Was she fond of the children as well?

KARL: I would like to think that she was, in her own way.  Some might disagree.  I've heard people whispering about the rain barrel.

DR. WILHELM: Why would they do that?

KARL: When Hansel was very small and Gretel was just a baby, it rained nonstop for a week.  We were all cooped up inside, and everyone was a little on edge.  After it stopped raining, I went into the forest to
chop wood.  When I came home, the rain barrel was tipped over, and Gretel was soaking wet.  My wife told me that she had been holding Gretel, and Gretel was being fussy, and somehow she had fallen into
the rain barrel.

DR. WILHELM: So it was an accident?

KARL: Of course it was an accident.  My wife wasn't a bad person, she just didn't have a lot of . . . maternal instincts.

DR.WILHELM: Would you say that your wife was a survivalist?

KARL: We're all survivalists, Doctor.  My wife and I left our children in the forest because we needed more bread for ourselves; the hungry birds stole Hansel's trail of breadcrumbs; the children broke off pieces of the cottage because it was made of candy and sweetbread, and the lady who lived there caught and ate children to survive.

DR. WILHELM: So all of these actions were, in your view, morally equivalent?

KARL: Everyone needs to eat.

DR. WILHELM: Tell me about the time you spent in the forest.

HANSEL: It isn't easy to pretend you're having a nice walk outdoors with your parents when you know they are planning to leave you in the woods to get eaten by bears.  I tried to keep the conversation
light--"Oh, look, you can see Fluffles sitting up on the roof," and so forth--but I know Mum suspected something.  She must have figured out how we got home the first time, because when I went to gather more
white pebbles from the yard, I couldn't get out of the house.  She had installed a padlock on the front door.

DR. WILHELM: And that was why you used breadcrumbs the next time.

HANSEL: Yes.  And everyone knows how that turned out.

DR. WILHELM: Perhaps you could tell me anyway.

HANSEL: Without the crumbs, we were lost. We wandered in the forest for days.  We ate a few berries, and Gretel found some brown mushrooms.  I tried a tiny bite of one, but it must have been
poisonous, because I threw up right after I ate it.  I ached all over, and I couldn't stop shivering.  Gretel stayed awake with me all night, holding my hand.  I think she felt like it was her fault, because she
had found the mushrooms.

DR. WILHELM: And then what happened?

HANSEL: The next day, we kept walking, but I had to stop and sit down about every hundred paces or so.  If it hadn't been for Gretel, I would have just curled up on the forest floor and waited for death.
While we were resting, a bird fluttered down and perched on a nearby branch.  Its feathers were snow-white, but it was the shape and size of a raven.  It stared at us for a moment before flying off to the roof of a nearby cottage.  The cottage was hidden in such a thick cluster of trees that we might have passed right by it without ever knowing it was there, if not for that bird.  Then we would have died in the forest, just like Mum and Dad had planned.

HANSEL: Your family is supposed to make you feel safe.  Did you know Mum tried to drown Gretel when she was a baby?

HANSEL: Gretel was crying, and the noise was getting on Mum's nerves, so she carried Gretel outside and dropped her in the rain barrel. Then she went back inside.  I was only four at the time, and the rain
barrel was taller than me, but I pushed it as hard as I could, and I was just strong enough to knock it over.  I tried to tell Dad what happened, but he didn't believe me.

DR. WILHELM: Your early childhood was obviously unhappy, even dangerous.  You could not have known that your mother had died while you were away.  Why, when you and Gretel were able to leave the
forest, did you choose to return to your parents' home?

HANSEL: Where else could we have gone?

DR. WILHELM: Tell me about the time you spent in the cottage in the forest.

GRETEL: After she caught us nibbling on her house, Mrs. Becker called us inside.  She fed us pancakes with butter and maple syrup.  They were yummy, but after I finished eating, I felt more sleepy than I ever felt before.  When I woke up, Hansel was in a cage and Mrs. Becker was shaking a broom at me and telling me to sweep the floor.

DR. WILHELM: Why wasn't Hansel given any chores?

GRETEL: Mrs. Becker was fattening him up because she wanted to eat him first.  She never gave me anything but carrot peels and rotten potatoes to eat, but she brought him delicious meals every day.  When
she wasn't looking, Hansel would push bits of food through the bars of his cage for me: cheese, pretzels, apple slices, cake.  Neither of us ate the sausages.  She made them herself, and we didn't know what--or
who--she put in them.

DR. WILHELM: At what point did you realize that you would have to kill Adelinda Becker in order to escape?

GRETEL: I never planned to kill her.  Hansel was the planner, the one who thought about things before they happened.  When Mrs. Becker bent over the oven, I saw her great big butt right there in front of my
face, so I just gave it a shove and slammed the door behind her.  Her screams were terrible.  Sometimes I have nightmares where I can smell her skin sizzling and her hair burning while she just screams and
screams like she won't ever stop.  It's awful.

DR. WILHELM: You were not kept in a cage, like Hansel.  You probably could have run away on your own.  But you stayed in the cottage, working like a slave, knowing that the only reward you could expect
for your labors was to be cooked and eaten. Weren't you afraid?  What kept you there?

GRETEL: I was used to being afraid.  The oldest memory I have begins with a feeling of fear.  I was so little that I didn't think in words yet, just in feelings.  In this memory, I am somewhere cold and dark and wet, and I can't breathe.  There is a circle of sky above me, but it's too far for me to reach.  There are bubbles coming out of my nose and mouth; they look like strings of pearls, and they are floating up towards the sky, but I am moving the other way, down into the darkness, and the circle of sky is getting smaller and smaller.  Then
the world turns sideways, and there is a big crash, and suddenly I'm tumbling towards the circle, which isn't sky anymore but grass and trees.  It comes at me in a rush and I'm so confused that for a moment
I'm even more scared than I was before.  Then I feel my brother's arms around me, and I start to cough, and then I can breathe again.  My brother holds me on his lap and he starts to sing, softly.  I didn't understand the song, of course, but I understood the sound of his voice and the feeling of being in his arms, even though I didn't know the word for love.

Does that answer your question?

Laura Garrison grew up in Erie, Pennsylvania, and currently lives in Maryland with her husband Justin.  Some of her other work has recently appeared or is forthcoming in Puffin Circus, Pig in a Poke, Jersey Devil Press, Umbrella (Bumbershoot annual), and Niteblade, among others.  She contributed a poem to the mermaid issue of Enchanted Conversation.
at 11:43 AM 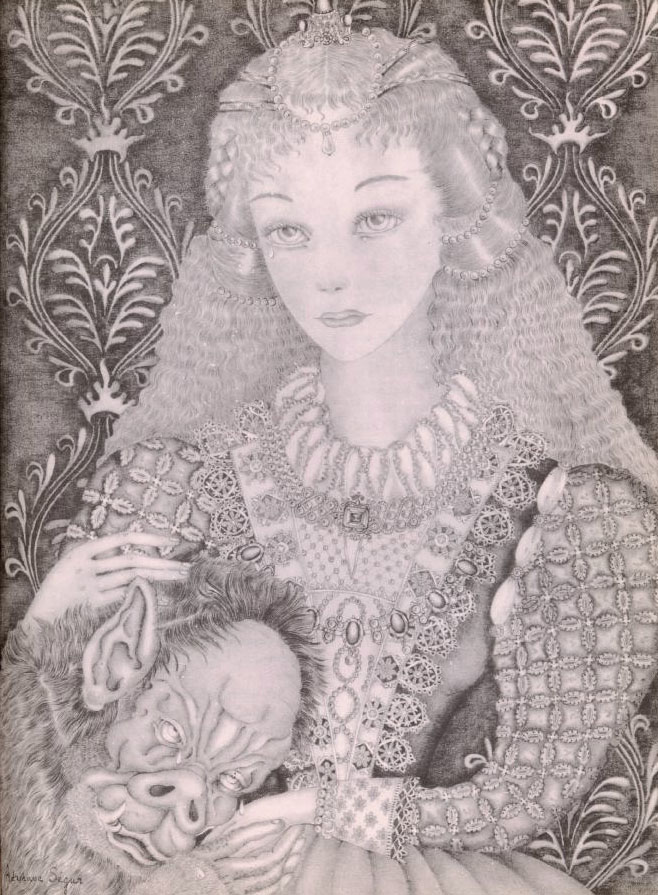 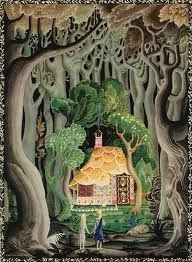